News Page 2
This page contains all the latest news about school amateur radio clubs. Please contact us to add your SARC news to this page. Send us a picture and description of your SARC activities. Remember to get parental permission to publish student photographs on this site and in our newsletters.
SARCNET Electronics Workshops at Moorabbin and District Radio Club
SARCNET used to provide free Electronics Prototyping Workshops for kids at Moorabbin and District Radio Club on Tuesday nights. We are currently looking for an alternative venue.
Matthew, Kyle, Basil and Jamie are shown completing the "Flasher" Electronics Prototyping Workshop. This famous two-transistor circuit, a "bistable multivibrator", is the basis of modern computer memory. 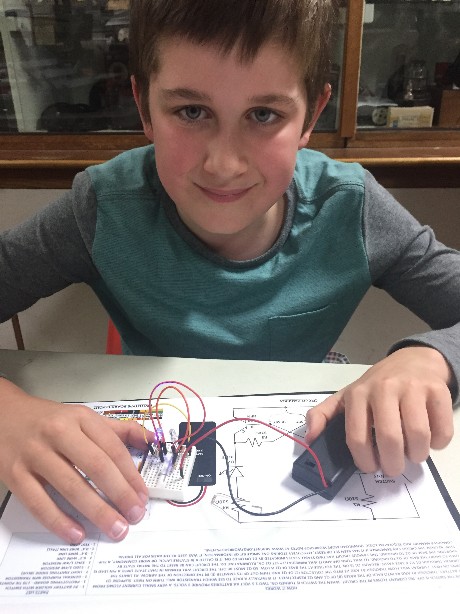 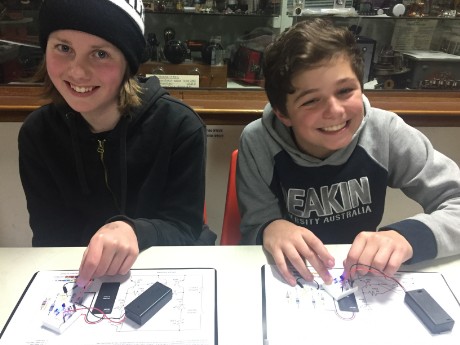 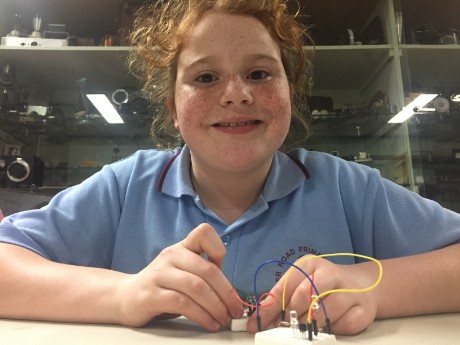 SARCNET @ Festival of Bright Ideas, Hobart, Tasmania
On Friday 10 August 2017, SARCNET provided an Electronics Prototyping Workshop for over 200 Students at the Festival of Bright Ideas in Hobart, Tasmania during National Science Week. On Saturday 11 August 2017, the exercise was repeated for over 100 youngsters, this time with their families.
The event was free to schools and the general public. The students were given a tray of electronic components. They were shown the function and symbol of each component, together with a circuit diagram and an animated slide-show explaining how it worked. They were then able to build the circuit, step-by-step, on a small prototyping board. When completed, a battery was connected and the circuit flashed two blue LEDs. To whet their appetite for building  electronics kits at home, the students were given catalogues, kindly donated by Jaycar and Active Electronics. Details of the SARCNET Electronics Prototyping Workshops can be found on our workshops page. 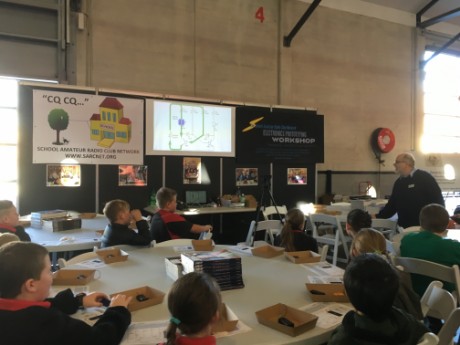 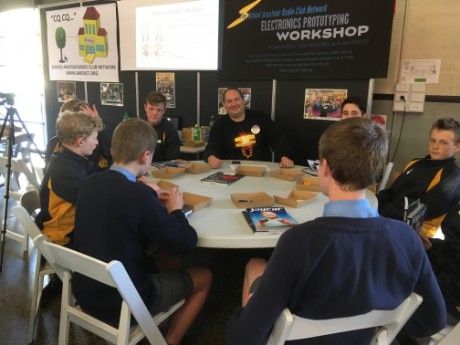 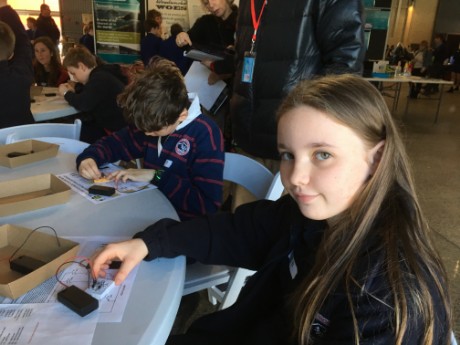 SARCNET @ Churchill National Park, Victoria
On Wednesday 7 June 2017, the whole of year 3 and 4, including members of the School Amateur Radio Club in their hi-viz vests, turned out for a day of adventure at Churchill National Park.
The day began with an educational presentation about the history, flora and fauna of the park from the park ranger. Then everyone was split up into six groups of six. Each group rotated through five 30 minute activities including HF Amateur Radio Communications and a simulated Search and Rescue activity.
For the HF Communications activity, the park was activated using the call sign VK3SRC/P for the Amateur Radio World Wide Flora and Fauna program. Contacts were made to stations in all southern states.
Meanwhile an aircraft, "crashed in nearby bush land", was located using Amateur Radio Direction Finding equipment. The survivors were rescued and treated with first-aid. The teams learnt valuable bushwalking, navigation, triangulation, portable radio operation and first-aid skills.
Teachers and parents all agreed that the students did a wonderful job. 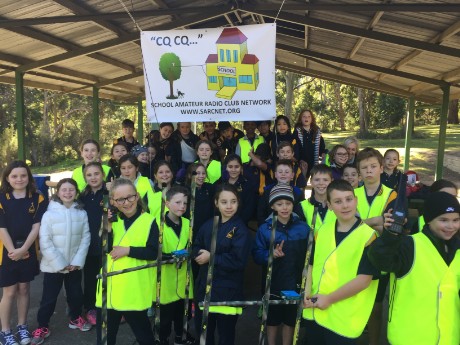 SARCNET @ Hahndorf, South Australia
On Sunday 21 May 2017, SARCNET provided a free and exclusive opportunity for Hahndorf Primary School students to get some extra hands-on experience with Science, Technology, Engineering and Mathematics (STEM).
The event was held at Hahndorf Oval in conjunction with the Wireless Institute of Australia (WIA) annual general meeting and "Radio is Magic" expo.
Students from years 1 through 7 participated in a range of activities including: 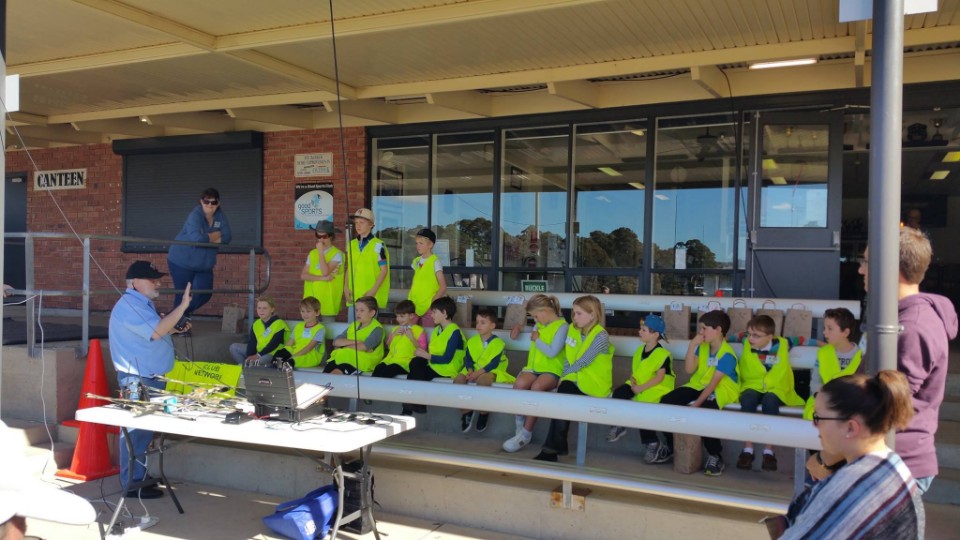 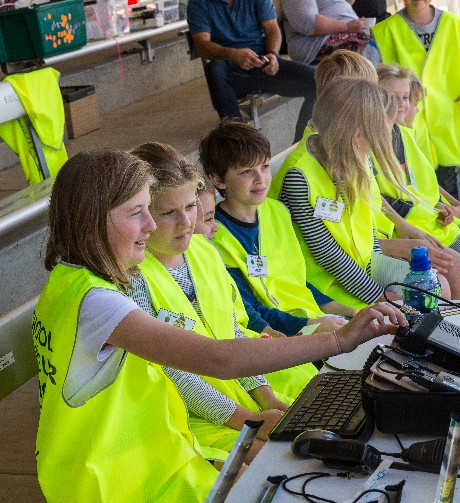 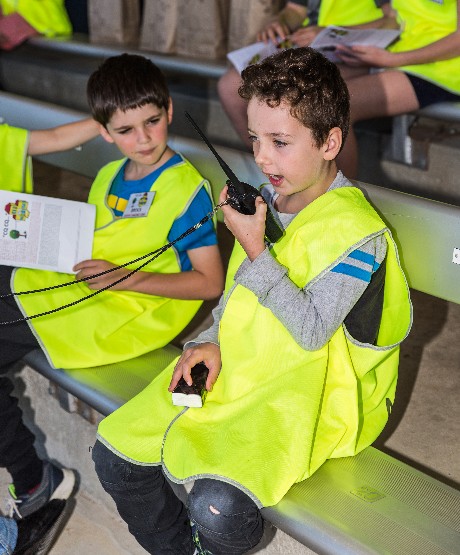 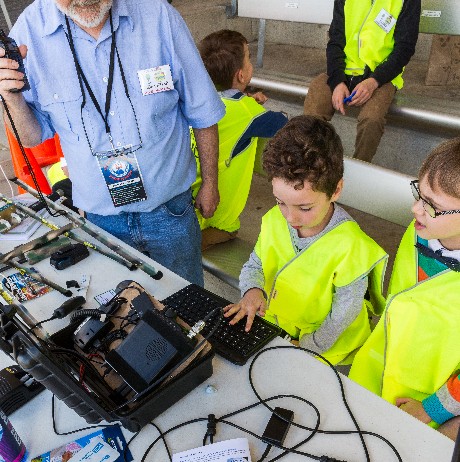 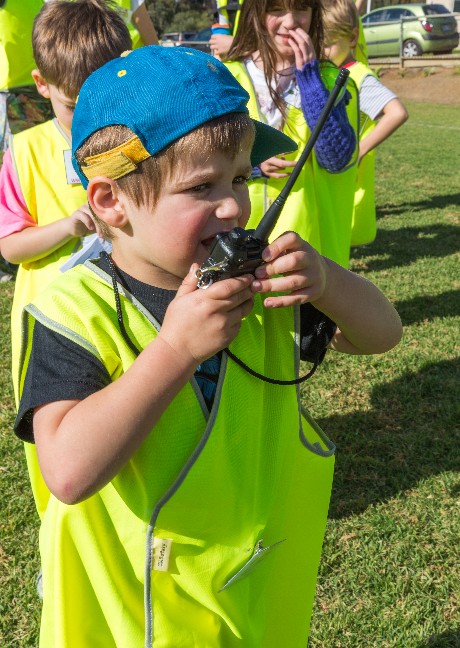 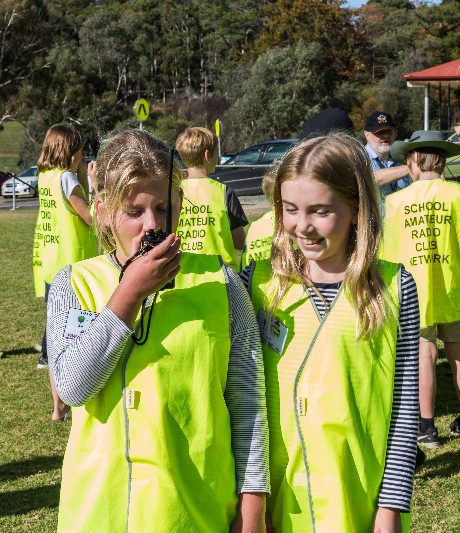 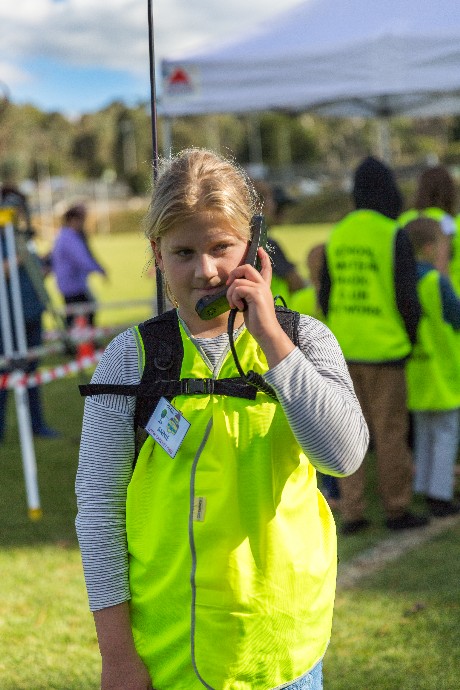 SARCNET Electronics, Soldering and Arduino Workshop at Moorabbin and District Radio Club
On 2 May 2017 the first weekly SARCNET electronics, soldering and Arduino workshop was held at the club rooms of the Moorabbin and District Radio Club.
Students investigated the concepts of voltage, current and resistance using a power supply, conductors, semi-conductors, insulators and resistors.
A semiconductor, optoelectronic, Light Emitting Diode (LED) became the focus of a number of experiments as the students tackled with the challenge of how to make this 2-volt device work when connected to a 5-volt microcontroller. The characteristic curve of the device was even plotted on a graph. The problem was cleverly solved by using a resistor to convert excess energy into heat.
With the resistor securely soldered to the leads of the LED, this hybrid component was inserted into a microcontroller prototyping board and was made to flash, on and off, under program control.
The exercise was precisely designed to give the students a preview of SARCNET workshops. Each week the workshops will combine elements of Science, Technology, Engineering and Mathematics, requiring investigation, intuition, problem solving and above all fun! 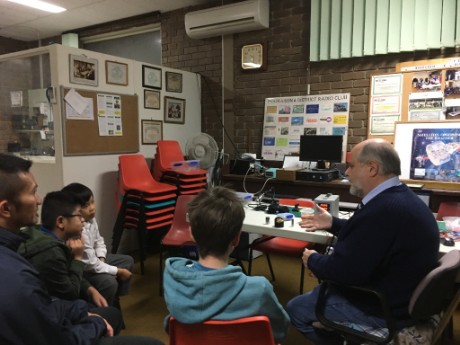 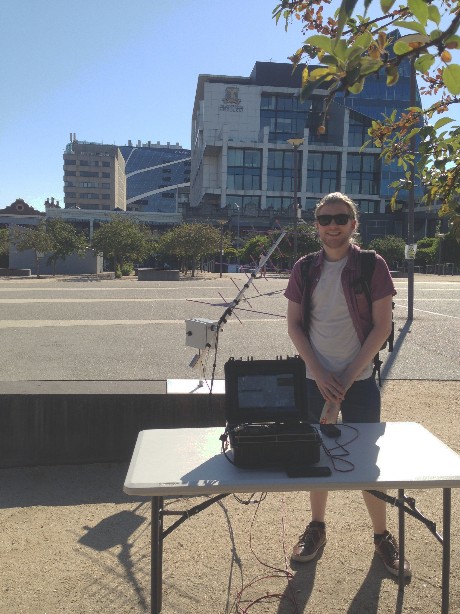 2016 SARC Excellence Awards
Top SARC students, Emilka, Ciara, Kyle each received their SARC excellence awards for shortwave communications together with a prize sponsored by the Altronics Springvale store. The store manager Mr. Harold Mollaneda said the prizes including a soldering iron, solder, tip cleaner and wire cutters would help the students continue their interest in electronic kit building at home. 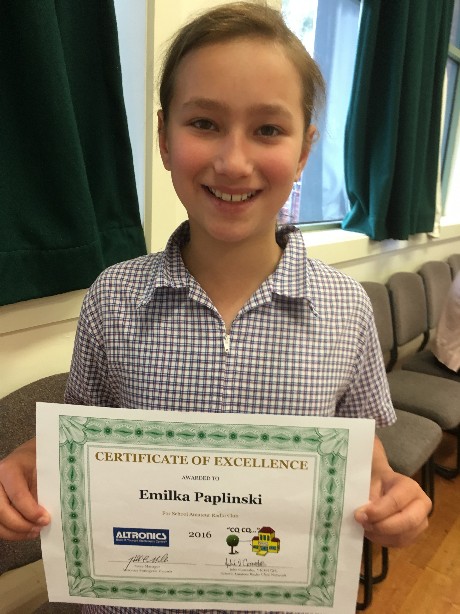 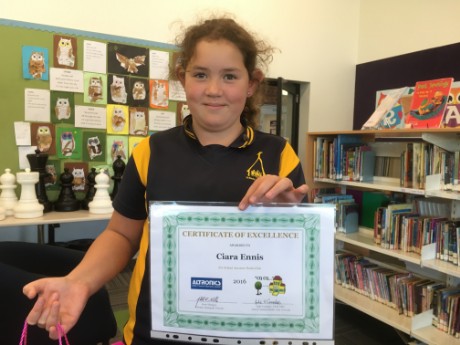 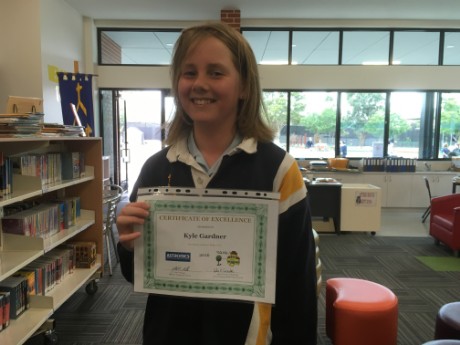 School Amateur Radio Clubs article published in Amateur Radio Magazine
Forward by Principal Michael Day
It is interesting that in this day and age of mobile broadband networks and social media that Amateur Radio, the pioneering radio hobby of the last century, would be an excellent way of introducing science and technology to young children today. Amateur Radio enthusiasts are an amazing, untapped resource for educators. They are hidden away in every community, and can provide their own equipment and expertise. They also have a zeal to pass on this technology to the next generation. And, I would say, their aging ranks could do with some new recruits from us. So this largely free and enriching collaboration between the schools and the Amateur Radio fraternity is a classic win-win situation. When I first introduced the school Amateur Radio club at St. Kevin's Primary School in Ormond Victoria, I had no idea what a success it would be. We were lucky to have an Amateur Radio enthusiast within our ranks, so the introduction was initially driven by this staff member. The teachers, parents and students are now raving about it. To see the children confidently building electronic kits or talking to other schools over shortwave radio is quite incredible. I am now exploring ways to expand this program. The following article, by Julie and Joe Gonzales, (our staff member and her husband) introduces the modern world of Amateur Radio. It explains how they set up Amateur Radio clubs at three primary schools in Melbourne and it provides all the information needed for other schools to get involved. 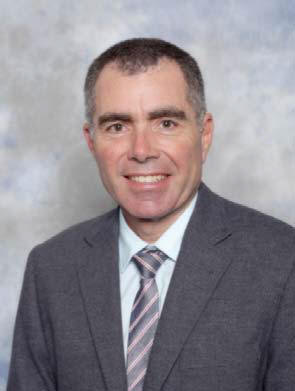 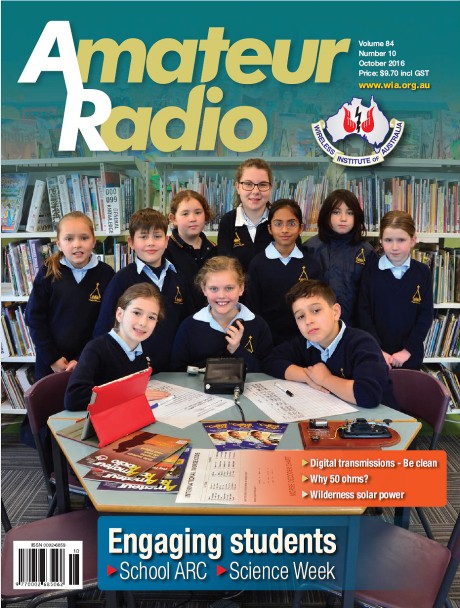 << Previous Page | News Index | Next Page >>
Back to content